×
Home Exploring the Wheel of Misfortune

Exploring the Wheel of Misfortune 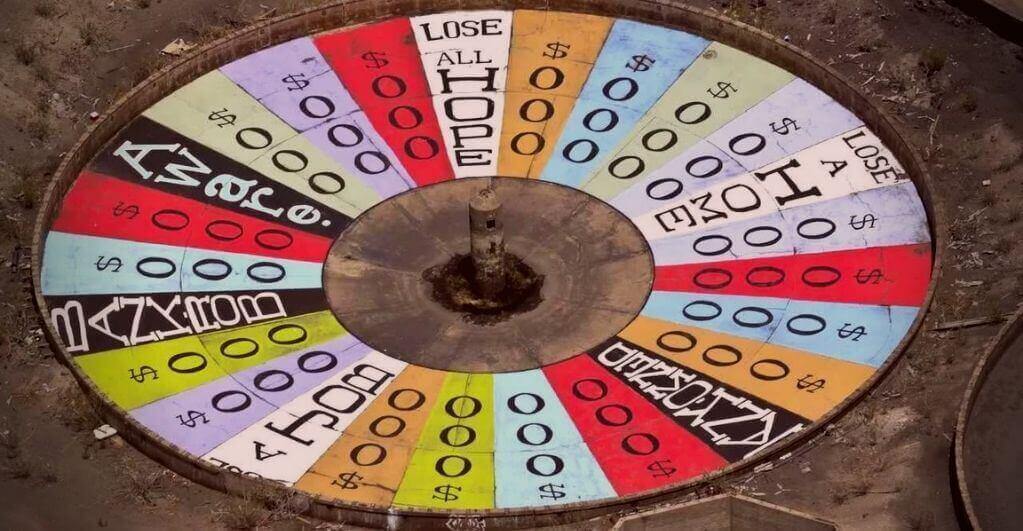 Aware, a renegade graffiti and street art artist from Oakland, was able to breach security and sneak into the abandoned Three Kids mining site in Vegas to create the Wheel of Misfortune with help from his crew. The out-of-the-way art exhibit is a powerful message in a city characterized by vice. The Wheel of Misfortune reflects the emotions of people coming to Las Vegas with the hopes and dreams of striking it rich but only to have them crushed. It is also reminiscent of the realities of Las Vegas after the economic crash of 2008.

What is the Wheel of Misfortune?

Wheel of Misfortune is a piece of art located at an abandoned mining site just outside Las Vegas, created by a graffiti artist named Aware.

The Wheel of Misfortune was painted inside one of several abandoned “thickener” pits at the mine, which operated from 1917 to 1961. The pits were used to “leach a processing pulp” in the production of manganese, making it possibly toxic.

Based on the concept of the game show “Wheel of Fortune,” this circle of misfortune measures 250 feet in diameter. Supposedly the Aware team evaded security over a period of three days to create this huge art feat. Unlike the 70s US TV game show “Wheel of Fortune,” where contestants could spin the wheel to win cash and prizes, this wheel was not based on the fantasies of winning big money;  Most of the spaces are painted $000 while some have messages such as “LOSE A HOME” or “LOSE ALL HOPE.” In fact, “AWARE” is the only optimistic space on the wheel.

How do you get to Wheel of Misfortune in Las Vegas?

When tourists visit Las Vegas once a year, The Wheel of Misfortune is probably not on their list of places to see.

Since the site isn’t very popular, it’s an intriguing site to explore. The wheel is located at Henderson behind Lake Mead Boat Storage and Laker Plaza. The Wheel of Misfortune is around a hundred feet away from the entrance to Lake Las Vegas and is adjacent to Lake Mead Parkway. If you’re looking for the Wheel of Misfortune, watch out for the landmark that is River Mountains Bicycle Shop around Laker Plaza. As you exit the Bicycle Shop, hang a right and go to the end of the paved parking lot. Then, Turn right in the direction of the hills. You might wonder if a place like this would have a section of parking spaces where you have to pay to park. That’s because the wheel is technically located on private property, but all you have to do is pay that $5 and make the two-minute walk behind the fence to check it out. Supposedly, the owners of this private property that the Wheel of Misfortune is located want to develop the land for residential or commercial use. The Wheel of Misfortune is a couple of minutes away from there. Take a walk following the GPS navigation to reach the site. If you want to use a mapping app to get there, then type in Three Kids Mine, as most mapping apps don’t recognize Wheel of Misfortune as a location. There are no signs, so you’re on your own. Even though the path is unpaved, the two-minute stroll to the Wheel of Misfortune is an easy one.

You could climb the short wall and get into the pit to take a better look or take selfies, or you could just snap pictures from afar.  The pit has a groovy echo effect, so If you do decide to climb into the pit, make some noise!

Should you visit the Wheel of Misfortune?

The Wheel of Misfortune is a side of Las Vegas that most people don’t get to see. But if you like urban exploration and going off the beaten path, you should check it out. However, if you are allergic to manganese, then it may not be a good idea to visit the Wheel of Misfortune as there may be traces of the toxic elements in the atmosphere. The site is littered with spray paint cans, rotting tires, and decaying debris of the mining complex.

Essentially, the Wheel of Misfortune reflects the hopes and aspirations with which every player comes to Las Vegas only to witness the evaporation of those dreams when bankruptcy befalls at gambling. The Wheel of Misfortune does not fail to attract people. Even the town folks of Vegas make trips to the place to take a look at the moving ground mural painting. The work has withstood the ravages of nature for almost eight years now and will perhaps last a decade or so before getting eroded by wind and rain. However, it is recommended not to visit the Wheel of Misfortune property with children. The air is too contaminated with manganese, and the ambiance is a tad too sinister for kids to have fun. Pin this spot on your list of places to see when in Vegas since this wheel will not outlast the elements.